You are at:Home»Recent News»BRC marks a year of ethic cleansing by asking ‘what is the International Community doing?’

UK supporters of the Rohingya people meet in Bradford to mark the anniversary of the start of the genocide in Myanmar on 25 August 2017, a day known as Rohingya Remembrance Day. The United Nations says the acts around this genocide ‘undoubtedly amount to the gravest crimes under international law’

The genocide in Myanmar started on 25 August 2017, a day now known as Rohingya Remembrance Day, and these attacks have since been classed by the United Nations as an act of genocide against the Rohingya.

“The UN report has also identified the role played by Aung Sung Suu Kyi, Myanmar’s first state councilor, for failing to defend its vulnerable citizens and to speak out against racism and extremism. The report also identified extremist monks Sitagu Syadaw and Wirathu for using social media to spread hatred and fear using lies and misinformation that contributed to the act of genocide. They also need to be held accountable, along with Facebook, Twitter and Instagram, and tried as contributors to the genocide”.

The British Rohingya Community event, held at the HQ of the Bangladeshi Youth Organisation in Bradford, featured a wide range of speakers, all of whom have shown strong support to the Rohingya people over the last year. Speakers included the Lord Mayor of Bradford; Imran Hussain, MP;  Louise Regan and Imran Arif from the National Education Union; Paul Cusworth from the Rotary Club; Fayez Haq from the Bangladeshi Youth Organisation; Fayez Syed from Save the Children; councillors from Bradford City Council and Newcastle City Council and many other generous, passionate and vocal supporters. 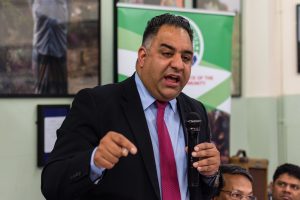 Imran Hussain, MP, takes the platform at the BRC’s ‘A year of Ethnic cleansing’ event in Bradford

Shaukat introduced the theme of the day’s events by asking, after a year of ethnic cleansing, “what is the international community doing?” He also reminded the audience that since the BRC become active, days after the atrocities in August 2017, it has given dozens of talks to organizations across the UK, taken the stage at numerous national-level conferences, given regular national and international newspaper and TV interviews and repeatedly traveled to the temporary camps in Cox’s Bazaar, Bangladesh – where almost one million Rohingya now live after fleeing the violence in their country over the past 12 months – to distribute aid and offer hands-on community support.

Shaukat added that the BRC also conducted a successful media campaign to protest against Leeds United summer tour of Mynamar. “We didn’t stop the tour,” said Shaukat, “but we gave Leeds United a bloody nose.”

The event, that saw attendees hang black ribbons to remember the thousands that have died at the hands of the Myanmar military,  was held on the same day the UN released a report that said top military figures in Myanmar must be investigated, for genocide in Rakhine State and for other crimes against humanity.

Al Jazeera reports that the UN investigation into the events last August in Rakhine found that  Myanmar’s military carried out mass killings and gang rapes of Rohingya with “genocidal intent” and the army’s commander-in-chief and five generals should be prosecuted.

It is, according to Al Jazeera, the first time the United Nations has explicitly called for Myanmar officials to face genocide charges over their campaign against the Rohingya, and Al Jazeera says it is likely to deepen the Southeast Asian nation’s isolation.

The report, that is based on hundreds of interviews and is the strongest condemnation from the UN so far of violence against the Rohingya, says the army’s tactics are “grossly disproportionate to actual security threats”.  The report also sharply criticises Myanmar’s de facto leader, Nobel Peace Prize laureate Aung San Suu Kyi, for failing to intervene to stop attacks. 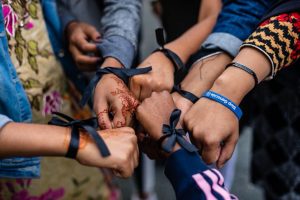 Attendees to the BRC event wore black ribbons to mark a year since the genocide in Rakhine State, Mynamar began.

The BRC meeting welcomed the United Nations report and also welcomed UK Minister of State for the Foreign and Commonwealth Office, Mark Field’s earlier statement that said “there cannot and must not be impunity for such acts”.

The BRC Bradford gathering also called upon Jeremy Hunt, UK Foreign Secretary, to push the UN Security Council to refer the Myanmar genocide to the International Criminal Court so the perpetrators can be tried for their war crimes in the ICC. If China cannot be stopped from vetoing the proposal, the BRC argues that the UK should propose the UN General Assembly set up an independent criminal tribunal as was done for Rwanda and the former Yugoslavia.

Nur Huda, Chairperson of BRC added that “the report has also identified the role played by Aung Sung Suu Kyi, the first state councilor for failing to defend its vulnerable citizens and to speak out against racism and extremism. The report also identified extremist monks Sitagu Syadaw and Wirathu for using social media to spread hatred and fear using lies and mis-information that contributed to the act of genocide. They also need to be held accountable, along with Facebook, Twitter and Instagram and tried as contributors to the genocide”.